In the previous article, we created and set up our AWS account. We are ready to introduce the most important IaaS AWS resource: the Amazon EC2 instance. This service allows you to create a Virtual Machine (VM) choosing among a broad range of instance types.

You can choose different classes of EC2 instances that are optimized for different use cases like:

You can choose your EC2 instance by selecting a broad range of hardware and software. Each instance type has a name like this:

When you select an instance you can choose:

In addition to the general-purpose EC2 instances (class t and m). Amazon provides some optimized instances that are particularly useful in some scenarios. Here some examples:

Amazon EC2 instances use a Pays as You Go pricing model, so you will pay only for the number of hours you effectively use your instance, its capacity, and the number of instances. Free-Tier is available for t2.micro instance type for 720 hours a month for 1 year.

You incur charges only when it is running paying only for the hours and seconds usage. Pricing depends on the region, OS, instance type, capacity (number of cores and RAM size), and instance size. Linux instances are billing by seconds after the first minute. Other instances (Windows and Mac) are billing per hour. It has the highest cost but no upfront payment.

You reserve the instances for a period of time from 1 to 3 years. The longer you reserve the greater is the discount. Moreover, the larger the payment up-front you make, the greater the discount will be.  You can pay all (AURI), partial (PURI), or no charge (NURI) up-front. Depending on the pricing option you select the discount can be up to 75% compared to the on-demand instances. This pricing option is useful if you know in advance the period of time you need it and you use this knowledge to get an additional discount (think to a database).

It is useful for short workloads you run on instances unused by other people. You can bid to use an EC2 instance and if the spot price for an Ec2 is less than your bid price you can use it. It is possible you lose the instances at any time if your bid price is less than the spot price. You can save up to 90% with this kind of instance compared to on-demand instances. However, it is not good for a steady-state workload (i.e. database). You can use it for any distributed workload, batch jobs, data analysis, image processing, and so on. Here you can find more details on Spot instances.

Here briefly the difference between these two pricing options.

If you have to manage an increase in the workload and you need to increase the number of instances, this will affects the prices as well. In addition, you should consider the use of a load balancer that sets additional costs on your bill.

There are additional services that you could need when you have to manage to scale for a workload increase. First of all, you can have CloudWatch that monitors your Ec2 instance at no additional costs.

If you want to use the Auto-Scaling service to manage the scale-in and scale-out process, there are no additional costs. The same is if you need an Elastic IP Address.

The lifecycle of Amazon EC2 is quite easy and you can see the state diagram in the following image. When you create an EC2 instance, you select the instance type and the OS to run on it. Initially, the machine goes directly in Running state. You can stop and start it again. Finally, when you don’t need it anymore you can terminate it. A terminated instance cannot go into the Running state again, usually, in few minutes the machine disappears from your instances list in the dashboard. 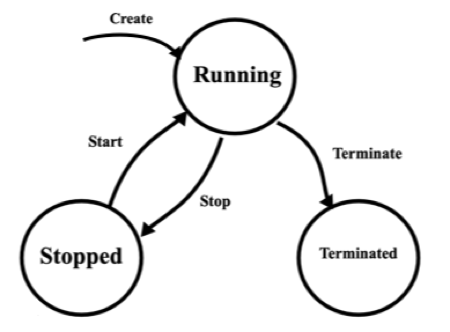 A Security Group is like a built-in firewall for your virtual servers to give you full control over how accessible your instances are. You have to imagine it like a filter that acts in front of the EC2 instance to analyze and filter all the incoming and outgoing traffic. You can define which service to expose via a port, from which machine receives incoming traffic, or to which machine sends outgoing traffic.

By default, only port 22 is accessible via SSH using keys for authentication. For outgoing traffic, by default, there is one rule that allows all kinds of traffic. You can allow additional incoming traffic by adding new rules in whitelist mode (there are only ALLOW rules). At the same time, you can restrict the outgoing traffic by removing the default rule and allowing only specific traffic. In each rule you can define:

For more details, check out the following page.

The following figure shows an example of how to configure security groups in a typical multi-tier web application deployed on AWS. 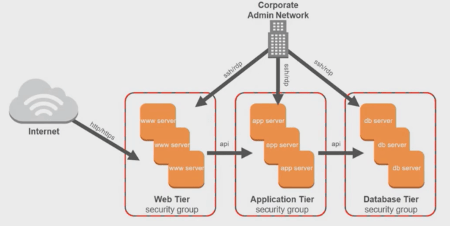 The three-tiers application is part of the same VPC and each tier belongs to a different subnet. Only the subnet containing the web tier is public while the others are private. On each tier, we can have one or more EC2 instances. All the instances accept ssh incoming traffic for administration.

In this article, we introduced Amazon EC2, the service to rent computers in the Cloud. We saw how to secure them with Security Groups. In the next article, we will do some hands-on lab on these resources.