In this article, I am going to talk about Amazon Elastic Block Storage (EBS) and Elastic File Storage (EFS). Storage is the second most important service category in AWS after Compute. AWS supports three Storage categories: Block, File, and Object Storage. Object Storage will be the subject of a future article.

The AWS EBS service allows you to create network-attached volumes for your EC2 instance. Since it uses the network to communicate with the Compute node there could be a bit of latency. The word Elastic means that it is possible to scale up or down the volume size depending on needs. By default, the EC2 instance uses one EBS volume as a root filesystem. You can decide if it should persist after the EC2 instance termination using the delete on termination attribute.

However,  you can attach more EBS volumes to an EC2 instance depending on your needs. For example, if you are running a database service on your EC2 instance you can choose to create a volume for your data. The service allows you to choose the Block Storage type between Hard Disk Drive (HDD) or State-Solid Drive (SSD). For your storage data, for example, choose an SSD is better because it provides better performance, while for logs you can decide to use HDD because cheaper.

As a general rule of thumb, you can attach an EBS volume to a single EC2 instance at a time in the same AZ. However, recently Amazon introduced the EBS Multi-Attach feature that enables you to attach a single Provisioned IOPS SSD (io1 or io2) volume to multiple instances that are in the same Availability Zone. Each instance has full read and writes permission to the shared volume. Finally, EBS supports encryption in a way transparent to the end-user.

When you create an EBS Volume it is in an unattached state. In order to use it in an EC2 instance, you first need to attach it so that it is visible as a block device. Then you can mount it to a folder and start using it. Once you finished working with the volume and you don’t need it anymore, you can unmount it from the folder and detach it from the EC2 instance.

When you attach the EBS volume to an EC2 instance you can decide to connect its lifecycle with the EC2 one using the delete on termination attribute mentioned above. In this case, if you terminate the EC2 instance the volume will terminate as well. 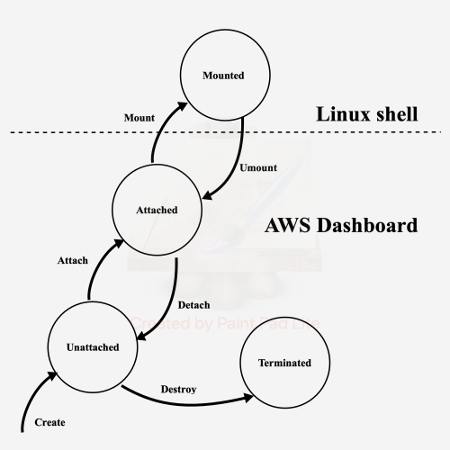 You must create EBS volumes on the same AZ of the EC2 instance.

The following figure shows the US-EAST Region with two AZs US-EAST-1A and US-EAST-1B. In these AZs there are 3 EC2 instances. Two instances have a single EBS volume attached, the third EC2 has two volumes attached. Finally, there is an EBS volume in US-EAST-1B unattached.

For EBS service the pricing change depending on the: 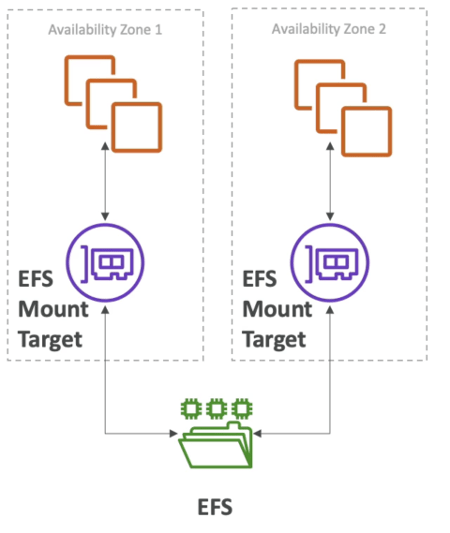 It is possible to associate a Security Group with an EFS service so that you can control its inbound and outbound traffic. EFS service is more expensive than EBS (almost three times more) but you only pay for the capacity in use.

EC2 Instance Store volumes are physical-attached storage that provides better performance than EBS volumes. Basically, they are physical SSD or Magnetic disks attached to EC2 instances. By definition, they can only live in the same AZ of the attached EC2 instance. However, even if they perform better they are not durable because the data are lost when the EC2 instance terminates. Data are lost even for hardware failure. For this reason, they are a good solution for a buffer, cache, and temporary data.

In this article, we introduced Amazon EBS and EFS, two storage services in the Amazon Cloud. We saw also how to attach volumes to these computers using the EBS service. Moreover, we analyzed briefly other Storage services like Amazon EFS and EC2 Instance Store. In the next article, we will do some hands-on lab on these services.